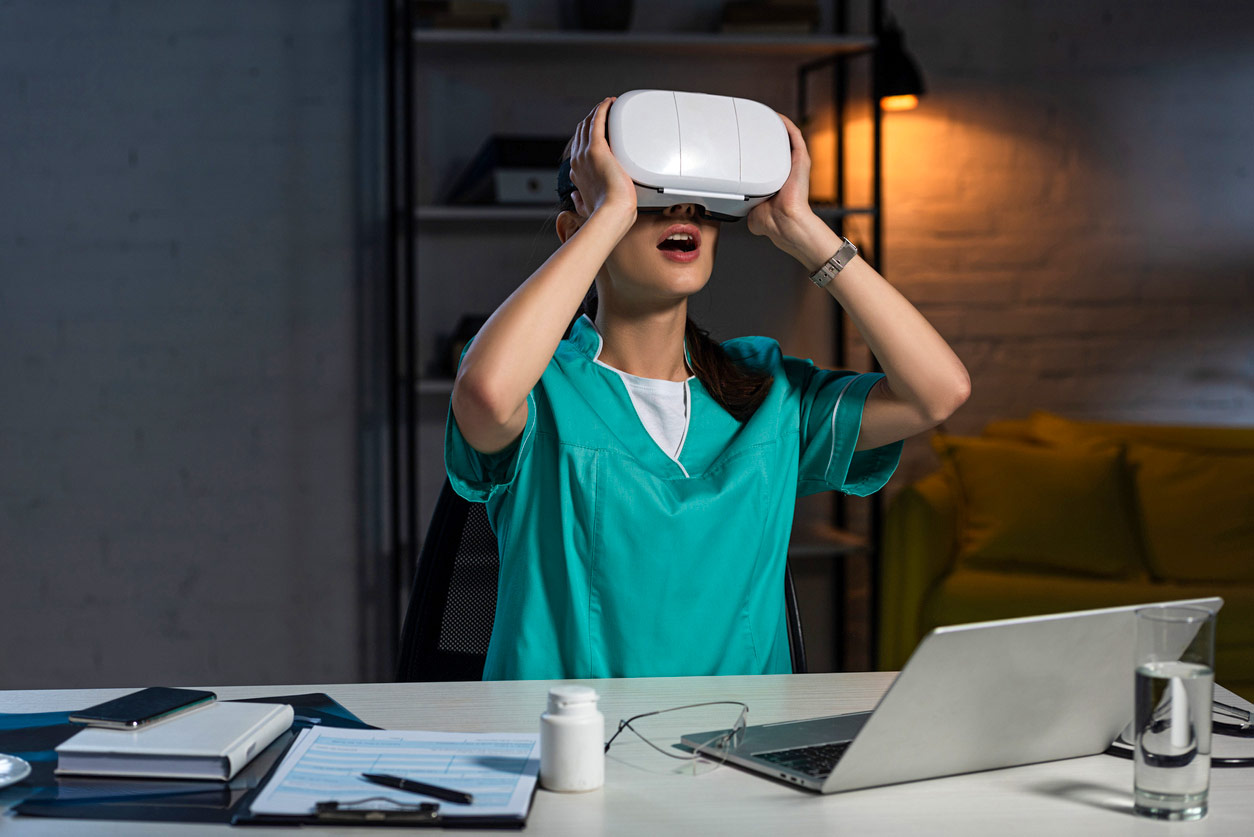 A virtual reality (VR) simulation helps undergraduate nursing students experience an emergency-care scenario from the perspective of an intubated patient. The scenario is intended to instill empathy that, contrary to popular belief, is a skill that can be acquired and strengthened.

“Many of us have experience with loved ones interacting with the healthcare system and not receiving the kind of care we felt they needed in terms of empathy,” reflects Clinical Assistant Professor Lori Sprague, also assistant director of the Innovative Simulation and Practice Center at Binghamton University’s Decker College of Nursing and Health Sciences. “And we thought, ‘Maybe we can help people understand what it’s like to be that person going through the experience.’”

VR is an Innovative Solution

“You need to be able to reach the masses, so we came up with this idea of creating a virtual reality simulation that is easy and accessible,” says Patrick Leiby, Decker’s director of technology and innovation. “You can get a $3 cardboard headset, put your phone in it, and have 100 students all sitting in a room at the same time, doing the same virtual reality simulation.”

Collaborative Research in Simulation and Practice (CRISP), a research group that includes both Sprague and Assistant Professor Rosemary Collier, won a SUNY Innovative Instruction Technology grant for the project. Collier and Sprague are also part of an interdisciplinary research group on tobacco use. They drew on their knowledge to create the vaping scenario in partnership with nursing programs at SUNY Delhi, SUNY Broome, and SUNY Brockport.

See also
How Can Nurses Avoid Accusations of Malpractice?

“It was right around this time that we were seeing some of these lung-injury cases, such as young people getting ‘popcorn lung’ and ending up in the ICU after using vaping products,” says Collier, also an emergency care nurse in the Binghamton area.

Unlike traditional video production, VR must be shot in a single take; to stay out of the scene, Leiby worked in a separate room, operating the camera from an iPad. The parts were played by faculty members, who practiced during several dress rehearsals before Leiby filmed the scenario with an Insta360 camera.

The faculty members drew on aspects of their own experience for their roles. The day before the filming, Sprague’s daughter was admitted to the hospital for a medical emergency; captured in the video, her feelings as a distraught mother were fresh and raw. Likewise, Collier, who played the lead physician, is deeply familiar with the communication blind spots that can sometimes occur in an emergency setting.

“If you’re ever in a critical care unit, physicians walk around with these teams of residents, respiratory therapists, and a nurse, going from room to room,” Collier recounts. “They have a job to do, and the job isn’t always therapeutic communication with the patient and family.”

Empathy in the Curriculum

So far, the VR simulation has been part of the Introduction to Professional Nursing course, where goggle-wearing students watch and then discuss the simulation together.

Empathy and emotional intelligence are part of the nursing curriculum and are developed in diverse ways. For example, nursing students learn how to physically transfer patients to a bed while practicing on each other, which not only imparts skill but also gives them insight into what a patient feels: empathy.

“I’m comfortable in a healthcare setting; it’s my home base. But for every patient who comes through that door, it’s a terrible day, their worst day. It can be hard to remember to put yourself in their shoes and to remember that this isn’t their home base,” Collier says. “You have to go out of your way to create connection and comfort.”

When Jenny Nigro lifted the goggles to her eyes, she was already feeling stressed from competing deadlines and a big test later that afternoon. Yet, as she watched the scenario unfold, she was struck by the patient’s vulnerability.

“It was a meditation on empathy to see how the care team’s brusqueness and lack of warmth resulted in (the patient’s) experience of helplessness,” says Nigro, who graduated with her nursing degree in May 2022. “In the post-brief, I noted how timely it was that our empathy VR simulation was occurring on a day when we were feeling overworked and tired. It offered an opportunity to reflect on how we might manage these feelings that will likely come up in nursing practice, so that we do not disempower our clients.”

Plans are in the works to create additional VR scenarios, such as ones involving patients who don’t understand English or situations that might require conflict-resolution skills. Leiby has also used the 360 technology on other projects, such as a virtual tour of Decker’s new Motion Analysis Research Laboratory.

Collier points out that virtual reality scenarios can play an important role for future nurses, allowing them access to experiences they may not encounter during their clinical time and sharing those experiences with classmates. At its heart, sharing is the foundation of empathy.

“Patients don’t always remember the clinical complexities occurring behind the scenes, but they will remember how their nurse or provider cared for and treated them,” Sprague says. “Sometimes it’s just a matter of pulling up a chair or changing your body language and respectfully giving a few moments of your time.”